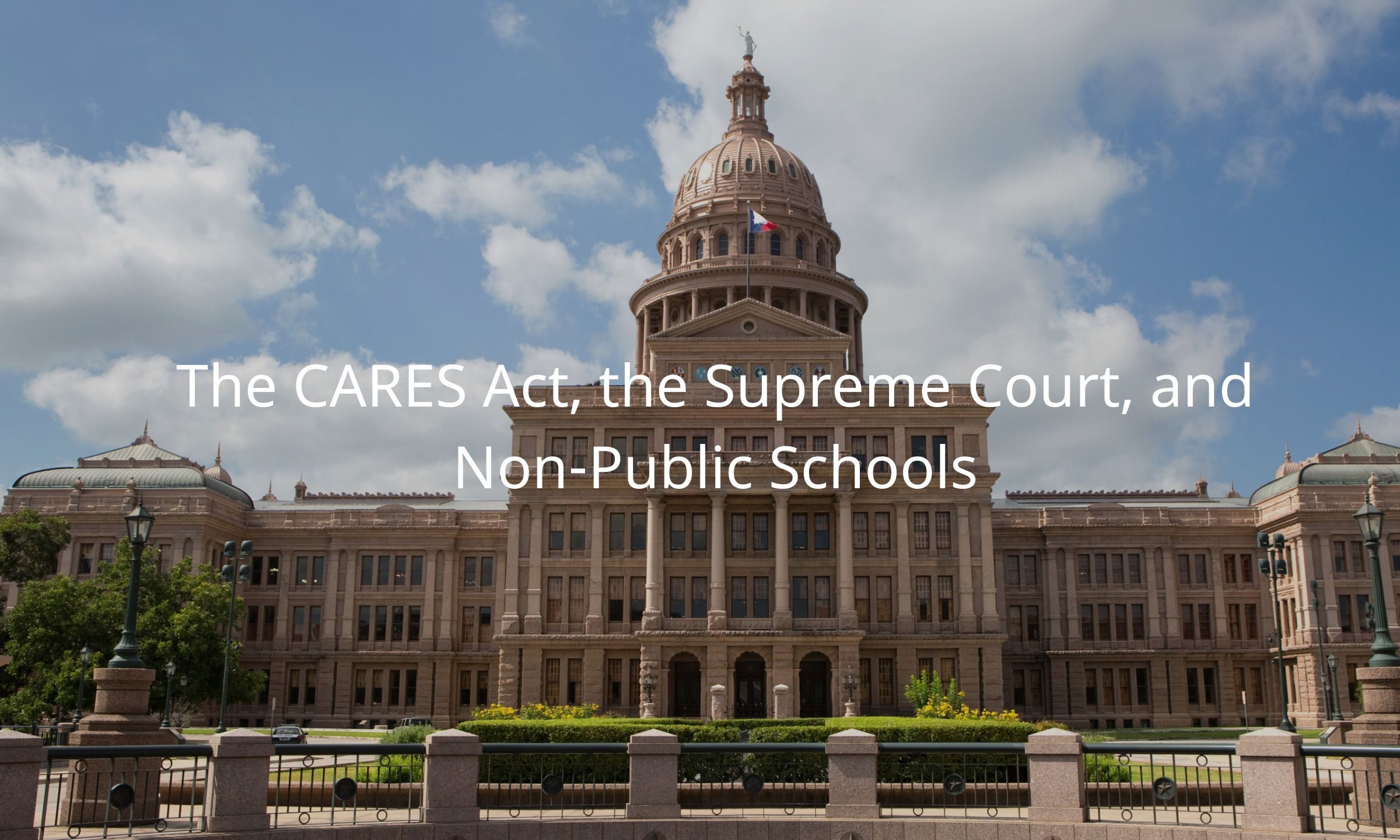 In this article we examine how the CARES Act impacts non-public schools, as well as explaining the very recent Supreme Court decision that will have a major impact on private schools over time.

The third federal COVID-19 relief package, the Coronavirus Aid, Relief, and Economic Security (CARES) Act, included $30.75 billion for education, called the Education Stabilization Fund. This funding was split among governors, state education agencies (SEAs), local education agencies (LEAs), and institutions of higher education. While no funds were provided explicitly for non-public schools (the Education Stabilization Fund is only for public schools), there are ways that non-public schools can benefit from the CARES Act and use the funding to address campus health and wellness challenges.

First, equitable services requirements apply to the Education Stabilization Fund. Specifically, an LEA that receives funds under either the Governor’s Emergency Education Relief Fund (GEER Fund) or the Elementary and Secondary School Emergency Relief Fund (ESSER Fund) must provide equitable services (but not direct funding) to students and teachers in non-public schools.

The equitable services requirement in the CARES Act has been – and continues to be – a contentious issue given how the U.S. Department of Education (USDoE) has interpreted the law. The USDoE recently issued a regulation that outlines how LEAs must calculate the funds available for providing equitable services to students and teachers in private schools.

The USDoE’s press release on the issue can be read here. Many believe that while the USDoE has provided some clarification and flexibility on this issue, it is still not what most believe Congress intended. It seems a safe bet that as Congress considers the next COVID-19 economic relief/stimulus package later in July, it may require the USDoE to implement equitable services the same way it is done under ESSA.

Under the CARES Act programs, the LEA in which a non-public school is located is responsible for providing equitable services to students and teachers in the school, as under most ESSA programs. (Note that a for-profit non-public school is not eligible to receive equitable services for its students and teachers under the CARES Act programs.)

If a non-public school declines to participate in the CARES Act programs or does not respond to an LEA’s good-faith effort to make contact, the LEA has no further responsibility to provide equitable services to students or teachers in that school. The LEA, however, must be able to demonstrate that it made a good-faith effort to contact all the non-public schools in the LEA. If non-public school officials have not been contacted, they may contact the LEA or the State ombudsman to inquire about equitable services under the CARES Act programs.

Funding for Private Schools in the CARES Act

There is some funding for private schools under the CARES Act, but it doesn’t come from the education-specific programs. The largest program of interest to private schools in the CARES Act is the Paycheck Protection Program (PPP), administered by the U.S. Small Business Administration’s (SBA). Across a number of bills, including the CARES Act, Congress allocated $659 billion for the PPP program, which can be accessed by non-public schools.

In addition, the CARES Act also makes another type of loan available: the Economic Injury Disaster Loan (EIDL). Businesses with fewer than 500 employees (as well as private nonprofits, which include 501(c)(3) organizations like schools) affected by a disaster may apply for an EIDL. Due to the widespread impact of COVID-19, every state in the U.S. is considered to be affected by a disaster.

If your school is faith-based, please review this guidance from the SBA regarding the PPP and EIDL. It is important to note that if non-public schools take out PPP or EIDL loans, they will be obligated to comply with SBA regulations and considered a recipient of federal financial assistance, and subject to federal laws from which the school may have been previously exempt.

A significant decision was announced by the Supreme Court of the United States (SCOTUS) on June 30: Espinoza vs. Montana Department of Revenue. The case has nothing to do with the CARES Act, but represents a massive change in private school jurisprudence.

In a sharply divided 5-4 decision, the court held that Montana’s prohibition on families using state tax-credit scholarships at religious schools was an unconstitutional violation of religious freedom (ie., the Free Exercise Clause of the First Amendment to the U.S. Constitution). In the process, SCOTUS invalidated Montana’s so-called Blaine Amendment, which is sometimes called a “no-aid” clause because it prohibits the provision of public funds to religious schools or institutions. Montana was one of 38 states to have such a provision in its state constitution.

In the short term, this means the Montana program is now constitutional, and the state can resume its operation. Montana will rejoin 17 other states that operate 22 tax-credit scholarship programs that served 300,000 students as of 2017. However, the decision doesn’t mandate the creation of school choice programs. State legislators have to take action to create such programs, and Idaho, Missouri, South Dakota, and Texas are likely to be first in line now that the constitutionality of such programs has been decided. There are states that have existing choice programs but bar religious schools from participating like Maine and Vermont. The attorneys who led the Montana case are challenging those states’ laws, and they now have a mighty big hammer to wield.

At the federal level, while President Trump and Secretary of Education DeVos are excited about the decision, it won’t change the calculus in Congress. The Espinoza case removes one argument against establishing school choice programs, but it by no means removes them all and a solid majority of federal policy makers are against federal funding for private schools. In the end, though, the Espinoza case is a very significant win for private school programs and it is likely that a number of states will seek to create – or expand – programs in the coming year.

At SchoolPass, we have been relentlessly focused on helping schools prepare for a fall reopening. If you want to help us tackle COVID-19 together, reach out to us here.